qEEG Asymmetry as a Reliable Measure of Adult Anxiety and Depression

Henriques and Davidson (1991) and Davidson (1995;1998) reported on a series of investigations which consistently found that hypoactivation of the left hemisphere was a marker for a predisposition for depression.  They specifically found activation related to the alpha frequency differences between hemispheres.  Tomarken & Keener (1998) also reported similar findings.

In response to this research Rosenfeld et al (1995;1996;2000) developed a protocol to alter alpha asymmetry related to hypoactivation.  His interpretation of asymmetry was based on a ratio (Rosenfeld et al., 1996; 2000; Baehr & Rosenfeld., 1998).  The ratio used an asymmetry ratio = A2= (R — L)/(R + L) with Cz as the reference site. Baehr et al (1997) published a study involving two cases of depression which she significantly resolved, as measured by the MMPI, using an alpha asymmetry protocol.  Choi et al (2011) more recently used NFB and the Rosenfeld alpha asymmetry protocol with a randomized design and control group involving 24 subjects.  They employed the Hamilton and Beck Depression inventories as pre-post measures of depression and significant changes were observed.  In a more recent review of the literature Gold et al (2012) found alpha asymmetry a reliable marker for depression.

Further investigations began to reveal that both frontal and parietal regions seem to be involved in emotion regulation; however, they appear to be distinctively related to different components of affect. Negative imagery impacts the parietal region most (Menella et al, 2015) which is consistent with findings that rumination activates posterior beta (Engles et al, 2007).  The retrieval of negative memories was reported to increased right parietal activity by Kungl et al (2016) as well.  Solomon et al (2014) report posterior asymmetry correlated with both negative affect and attention difficulties.  This indicates a relationship between depression, affect and attention which was also noted in a review by Leech & Sharp (2013). The underlying reasons for this can be found in the neuroimaging literature due to the relationship between the salience network, the default mode network and the central executive network (Menon, 2015)

Bruder et al’s (1997) findings appear confusing at first in light of other investigator’s findings, but by employing a dynamic model of changing asymmetry many similar contradictions can be explained.  In our proposed model, anxious individuals usually begin their responses to stressful stimuli by developing beta in the right hemisphere and then later develop depression gradually with increasing alpha in the left hemisphere.  More recent studies in the neurphysiological aspects of anxiety indicate that anxiety leads to a state of chronic overexcitment in the brain that results in a build up of excess glutamate in the interstitial regions between neurons resulting in excitotoxicity (Alkadi 2013;Savic, 2013; Yuen et al, 2012).  Glutimate is neurotoxic at higher than normal levels and triggers a proinflammatory response (Wang & Michaelis, 2010).  This response redirects enzyme activity to reduce serotonin in favor of quinolinic acid (O’Mahony 2015). This is reflected in increasing global reductions in metabolic activation which appears as elevated levels of diffuse alpha.  It is proposed here that these reductions are a consequence of reduced mitochondrial resources as reported by Moritani et al (2005) and Lin & Beal (2006).  Furthermore, these reductions appear more in the left hemisphere because of the excess activity in the right hemisphere.  Davidson speculates that there may be social consequences affiliated with shifts in hemispheric dominance and withdrawal would provide one avenue for avoiding stressful stimuli and providing opportunities for rest and recovery to the organism.

As alpha dominates excessively in the left hemisphere, beta begins to migrate to the left hemisphere to compensate for the excessive alpha present.  This activity is consistent with Pasqual-Leone’s (2005) model of neural compensation.  It is at this point that individuals begin to report diminished anxiety as the thalamacortical idling reduces inputs from the amygdala to the cortex (Le Deux, 1996).  It is expected, based on the foregoing, that peak anxiety symptoms in conjunction with peak depression symptoms occur at the time when alpha is 100% on the left and beta is 100% on the right.

There appears to be a strong neural basis for this phenomenon within the structure of the central nervous system.  Craig (2005) reports that activating vagal inputs into the left anterior insula increases parasympathetic dopamine and oxytocin activity and deactivates right hemisphere norepinephrine activity while activation of the right anterior insula from these ascending pathways has the opposite effect. This Opponent Process which is ubiquitous in the peripheral nervous system is associated with approach and withdrawal theories going back decades.  Of further interest is the successful implementation of medical devices that electrically activate the left vagal pathways to relieve chronic depression based on past research in these areas (Howland, 2014).

It should be noted that some studies looking at EEG asymmetry focused on only one type of montage used in Davidson’s earlier studies.  A more careful reading suggests that these other studies ignored the fact the Davidson et al (2000) found similar asymmetry patterns between three different montages used to measure alpha power.  If this is the case, it is proposed that linked ears may show the same asymmetry patterns. This would be a more useful finding as it would allow accurate assessment from most of the qEEG databases using linked ears reference. In addition, it is proposed that total left hemisphere alpha greater than total right hemisphere alpha, using linked ears, should also be related to depression.  A further consideration is that the amount of alpha left as compared to right may also reflect intensity of depressive features if hypoactivation is indeed a key feature of depression.  In order to empirically test this hypothesis with respect to a validated instrument that measures anxiety and depression such as the Interactive Self Inventory (ISI) (Soutar, 2014), it is necessary to first define at what point clinical depression or anxiety begin to manifest on the ISI in symptomolgical terms in comparison to the point at which reported symptoms manifest with respect to EEG asymmetry in physiological terms.  Carefully linking these measures would appear to be a crucial step forward in the research.  Determining these measures would allow for more accurate future studies with larger sample sizes.

Ninety adult subjects ages 21 to 74 were selected from the New Mind Center clinical database. Gender was not considered a relevant confound based on prior research findings.  Each subject had filled out the Interactive Self Inventory (ISI) assessment for anxiety and depression as well as receiving a qEEG with linked ears montage to determine percent asymmetry. Subjects with ISI scores 11 and below were considered in normal healthy range and excluded from the sample, leaving 53 subjects.  This was based on a prior analysis showing the scores of peak performers on the ISI dimensions of anxiety and depression were all 10 or less.  In addition, the ISI was cross-correlated with the Beck Inventories to establish clinical and subclinical cutoff values.  The covariation between instruments is shown in Fig 1 below. 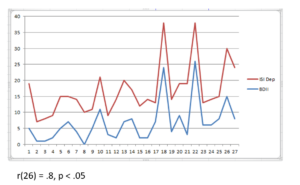 Percent of total asymmetry was based on the number of locations higher in amplitude in one hemisphere than in the contralateral hemisphere.  In order to generate valid categories for statistical analysis, we needed a good estimation of alpha and beta asymmetry values indicting pathology.  At what point in asymmetry, whether alpha or beta, does pathology become manifest in symptoms that impede social functioning?

So, what were the values on the ISI that could be used to generate these alpha and beta asym cut-offs? We used the Beck Inventory to confirm the ISI values since they tightly covaried. They appeared to be at an ISI score of15 based on Beck comparisons since the category cells showing depression yes or anxiety yes on the Beck on average had ISI scores greater than 15.  Consequently, subclinical depression was determined to begin around 11 and move into the score range of 15 or greater on the ISI depression scale. It was observed that the average alpha asymmetries begin to manifest consistently at the 50% level when using this ISI value. We noted tha same pattern for beta and anxiety. (Mild clinical depression becomes evident on the Beck Inventory at an ISI score range of 18-20. This is a range because there are more data points on the number line of the ISI total score than the Beck total score.)

As a result of the foregoing, those subjects with 50% or more beta locations in the right hemisphere were deemed as physiologically anxious and those with 50% or more alpha in the left hemisphere were deemed as physiologically depressed based on an initial analysis with ISI and Beck Inventory scores. These were a first estimation of the definition of significant brainwave asymmetry levels.  This means symptoms were reaching a level of intensity and variety such that subjects were reporting mild anxiety symptoms or mild depression symptoms on the Beck inventory as measured by the ISI (we had 30 Beck inventory measures but 53 ISI measures and leveraged our higher sample this way).  This was important because both depression and anxiety symptoms increase in variety and intensity as either depression or anxiety in general increases.  Future studies may more precisely estimate the cut-off points, but these appeared to be strongly correlated with this sample.  The category cells showing alpha asym yes and beta asym yes had brainwave asymmetries greater than 50%.

If both anxiety and depression asymmetries were low, then subjects were disqualified as this was considered a medication effect or underreport of symptoms since only two of these were found in the entire subject dataset.  This was also partly in consideration of the rule employed that alpha and beta asymmetries below 50% were likely indicative of subclinical symptoms.

The ordinal level categories (Cat) used in the contingency tables derived from this preliminary data analysis are as follows:

A chi square statistical analysis was employed to determine if the anxiety and depression groups are correlated with asymmetry and independent of each other using the derived category definitions.  The 2 X 2 contingency table is listed below.  The calculated chi-square statistic was 6.6681 with a critical value of 3.8415 and 1 degree of freedom.  Significance level was .05, p = .009815.  This indicates clearly that asymmetry is an accurate marker of anxiety and depression when the correct parameters are used.

Part of the main difficulty of this investigation was determining valid cutoffs for anxiety and depression with respect to asymmetry.  Fortunately, this became quite obvious in the preliminary data analysis when comparing client self-report of symptoms with percent asymmetry for beta and alpha. The fact that only 1 out of 5 subjects scoring 12 on the ISI depression scale had over 50% alpha asymmetry while the others had very high beta asymmetries of 80% or higher made the decision clear.  The same pattern followed for subjects scoring 13 and 14.  At an ISI depression score of 15 and higher, almost all subjects showed alpha asymmetries greater than 50%.  This also suggests that not only does beta asymmetry precede alpha asymmetry in manifestation but also supports the idea that anxiety precedes depression in its development.  It is strong support for the argument that depression is “end state anxiety” resulting from metabolic exhaustion of resources over-utilized in the highly aroused anxious state. Depression may then be a metabolic protection mechanism that reduces social interaction resulting in withdrawal behavior to allow the organism to recover resources and re-assess behavioral options.

A future analysis with a larger more random sample would help to confirm whether these cut-offs are indeed valid and constitute the best basis for further investigations.  Also of interest are the useful theoretical implications with respect to neurofeedback that this line of analysis may offer. The successful implementation of medical devices that electrically activate the left vagal pathways to relieve chronic depression suggest that other modes of activation such as neurofeedback are likely to be valid.  It could easily be argued that increasing beta while reducing alpha frequencies through neurofeedback could be activating by putting a demand load on left hemisphere calling for increased electrical activity and the associated increased blood perfusion.